University of Texas at Austin

Overall six-year graduation rates have improved as well, reaching a record-high 87.5% in 2020. 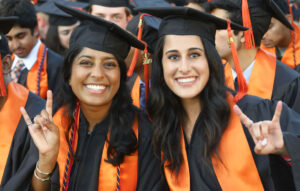